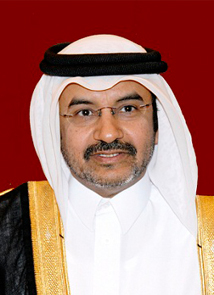 Board Member of Qatar Chamber of Commerce and Industry.

Head of Trade and Research Committee.

Education and solid management ….are the secret of success.

He is one of those who have the will and true knowledge. The features of his character were formed since he was working with his father in a commercial activity where he gained determination, resolution, and courage to confront difficulties and obstacles. He refined these leadership qualities by education and knowledge until he became Deputy Chairman of the Trade and Research Committee at Qatar Chamber of Commerce and Industry in the previous term of the Chamber; then Chairman of the same committee in the current term, besides his membership of the Permanent Committee of Housing and the Committee for Naming Streets and Squares, thus making public work an additional part of the character of the businessman Mohammed Mahdi Ajayan.

He is the chairman of Ibin Ajayan Trading Group, which is one of the pioneering Qatari companies operating in various trading and services sectors. The group incorporates the following companies :

1. Qatar Express Transport Company – one of the major Qatari companies working in the field of transport.

3. Ibin Ajayan Trading Company – the agent for various vehicles and heavy machinery including;

4. Sixt Car Hire Company – a German car hire and limousine services company with branches all over the world.

7. Gulf Services Company – operating in the field of basic support services including cleaning, security and catering.

10. North Spain Company – operating in the field of electromechanics.

Email to a Friend